The next nvidia mobile gpu.
*** 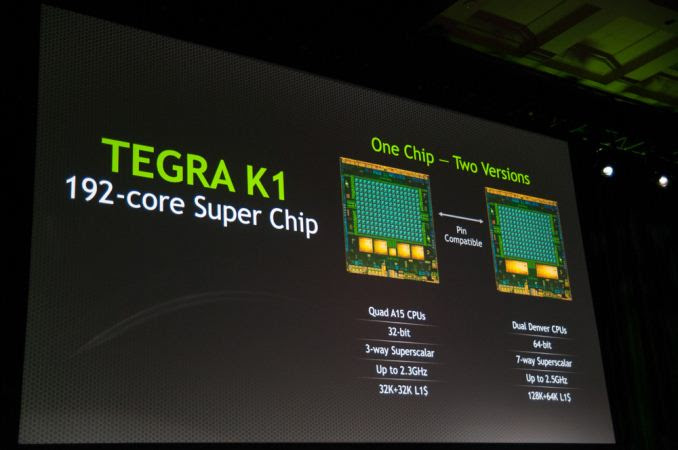 During its CES press conference, NVIDIA revealed its new Tegra K1 SoC will be available in two versions. One version will ship with four ARM Cortex A15s, while the other will ship with two NVIDIA designed Denver CPU cores. We don't know much about Denver other than it's a custom 7-wide superscalar 64-bit ARMv8 design.

NVIDIA claims very high single and multithreaded CPU performance. It's important to note that the Denver version only comes with two cores, something we've argued is likely the more optimal use of die area in mobile. Max frequencies top out at 2.5GHz. Given that NVIDIA has silicon back already I suspect this is a 28nm design. The L1 cache is 128KB + 64KB (I$ and D$?).

The Denver CPU cores will be paired with a 192 CUDA core Kepler implementation (1 SMX). No word on differences in power or performance. The Cortex A15 version of Tegra K1 will be available in 1H 2014, while the Denver version will be available in 2H. The two SoCs are pin-compatible, indicating that there won't be any difference in memory interface width.