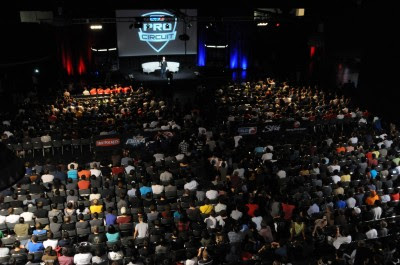 For the second year in a row, Major League Gaming is coming to Raleigh, and with it comes an unprecedented amount of anticipation for a world class event. Previous MLG Events have filled convention centers in Dallas, TX, Columbus, OH and Anaheim, CA, literally running out of seated and standing room by Sunday afternoon. The above photo is from the most recent MLG Event in Anaheim.

Major League Gaming is the largest competitive gaming league in the world, bringing “E-Sports” to over 40 million people annually. In 2011, there will be 6 MLG Events, culminating in the National Championship event in Providence, Rhode Island. The 3 main title events are tournaments in Halo: Reach, Call of Duty: Black Ops, and StarCraft 2: Wings of Liberty. This year, the three previous events have drawn competitors of international caliber, with Starcraft 2 having brought players from Korea, Germany, Sweden, and Canada, and Australia. The three day event will start on August 26 and finish on August 28, at the Raleigh Convention Center. Think you’ve got what it takes to compete against the top gaming talent in the world?

Aside from the tournaments, where thousands of spectators will view all of the action via three giant main stages with huge video screens and live commentating, there will be booths where attendees can meet and greet with Pro gamers, get pre-release access to games, and check out products from many of the partners of MLG.

The event will take place at:

Raleigh Convention Center, Halls A & B


Passes can be purchased here. So, if you want to try to go toe-to-toe with the best in the world, or to meet and greet with some of the industry’s most popular faces, or just observe some amazing gaming, come out to MLG.