Interesting. Each image is spiked for just a few ms every 16 ms. This apparently reduces perceived blur due to retinal persistence: previous image doesn't overlap next.
***
// published on Ars Technica // visit site 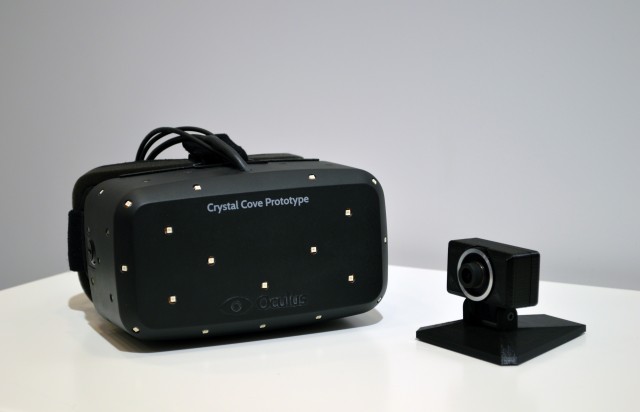 Those white dots are key to making the new Rift prototype a huge leap over previous models.
Oculus

At CES this week, Oculus VR is showing off a new prototype of its Rift headset, dubbed “Crystal Cove,” that incorporates a camera-and-LED system for head tracking and a quick-switching OLED display to reduce motion blur and increase image persistence.

The white dots on the surface of the Crystal Cove prototype in the image above are actually tiny infrared LEDs that send out signals visible to a camera specially designed by Oculus. This data is integrated with the gyroscope data that’s been in previous Rift prototypes to track your head’s absolute position and orientation as you crane your neck and lean forward, back, and side to side.

It’s hard to overstate just how much this changes the Rift virtual reality experience. Now, if you see something interesting, you can actually lean in to zoom closer to it. If you want to see the side of something sitting just in front of you, you can lean forward and around it and turn your head to the side to get an entirely new viewpoint. The environment no longer shifts with you, so to speak, when you shift your head around, as it did with previous Rift prototypes. Instead, the environment stays rock still and your virtual viewpoint is all that changes.