Find: GameDock turns your iDevice into an snes console

Sweet! Peripherals will a big(ger) for phones. Another reason Nintendo is in trouble.

GameDock wants to turn your iDevice into a game console 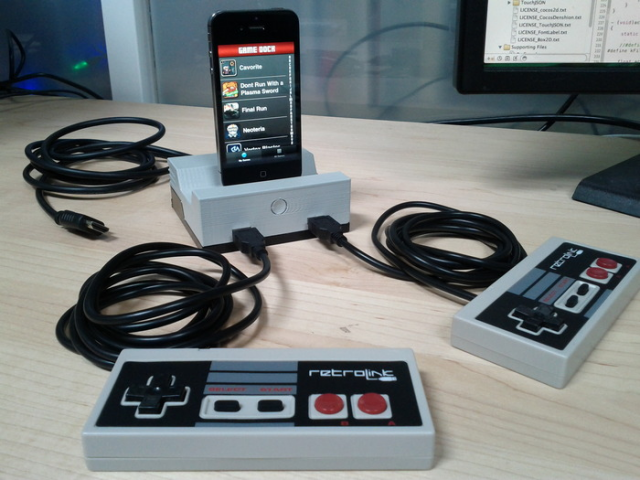 With the Android-based Ouya unveiling earlier this week to massive fundraising success, I've heard many people wondering why Apple hasn't done something similar to extend the success of iOS gaming into a more traditional TV-based game console. Yes, iOS 5 lets you use AirPlay Mirroring to stream game images from a portable iDevice to an Apple TV, but the results can be pretty jerky, and the scheme still relies on touchscreen controls that are ill-suited to a lot of TV-based games. If Apple released a console dedicated to bringing iOS games directly to the living room TV, complete with a traditional, button-based controller, it would have the potential to really shake up the existing console market.

Chris Jorgensen and Andi Greisel, who develop iOS games like Cavorite and Zombie Karts under the name Cascadia Games, got tired of waiting for Apple to act on that idea. That's why they came up with the iOS GameDock, an external iDevice accessory they're trying to fund on Kickstarter that basically turns an existing iDevice into a TV-based console powered by USB controllers and an HDMI output.

"Honestly, I've found myself hooking up my old SNES to my TV for fun lately," Jorgensen said. "And there are so many great retro games on iOS, I figured, why not recreate the old console experience with your phone in its entirety?"